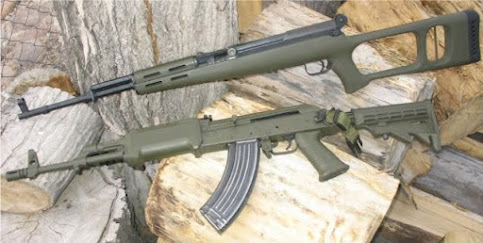 OK, it's time to clarify something here... What is an assault weapon?
People are constantly trying to correct others over the use of the term, "assault rifle" or "assault weapon". I think some of them are desperately trying to make themselves look more knowledgeable than they really are or, maybe they are just trying to make a political point that really doesn't exist. Either way, they are making way too big of a deal out of it. The point is, it's starting to make them look silly.
Their big argument is that a rifle cannot "assault". They say assault is verb, not a noun. OK, fair enough, I get it. However, when you carried that rifle onto the beach at Normandy to conduct the assault on the enemy thereon, did your rifle not become the tool to facilitate that assault? An assault rifle, so to speak? Even your bolt-action rifle?
Others use the example of the German StG 44 or "Sturmgewehr 44" to make their argument, saying that it was the first actual assault rifle. Why? Well, because "sturm" means to storm or assault in German and "gewehr" means rifle or shotgun. Over the years, it has kind of become the standard term for military-style rifles. So, Sturmgewehr literally means assault rifle. Why? Because it was used to assault. Was it the first assault rifle? No, it wasn't, but it was the first to be named as such. Additionally, since the StG 44 had full-auto capability, the nitpickers claim that in order for a firearm to earn the title of "assault weapon", it must also have full-auto capability.
Balderdash!
It doesn't matter if a firearm is short, long, heavy, light, convenient, full-auto, semi-auto, high-capacity or has a folding stock, forward pistol grip or a heat shield. What matters is what it is used for. Daniel Boone's Kentucky rifle was an assault rifle, at times, as was the 1873 Springfield and the Remington '03-A3.
Golf club is a noun. It's used for golfing, that's why they call it that. Do you know what they use a cutting board for? Yep, it facilitates the cutting of meat and potatoes. How about a punching bag? Anyone want to hazard a guess as to what those are used for? You got it! Punching! This noun's only job is to hang there and let you punch it. How about a shooting rest or a fishing pole? Butcher knife? And so it is with the assault weapon.
Oh, and guess what a "hunting" rifle is used for. But hunting, is a verb. How can that be?
Posted by @Desertscout1 at 16:17