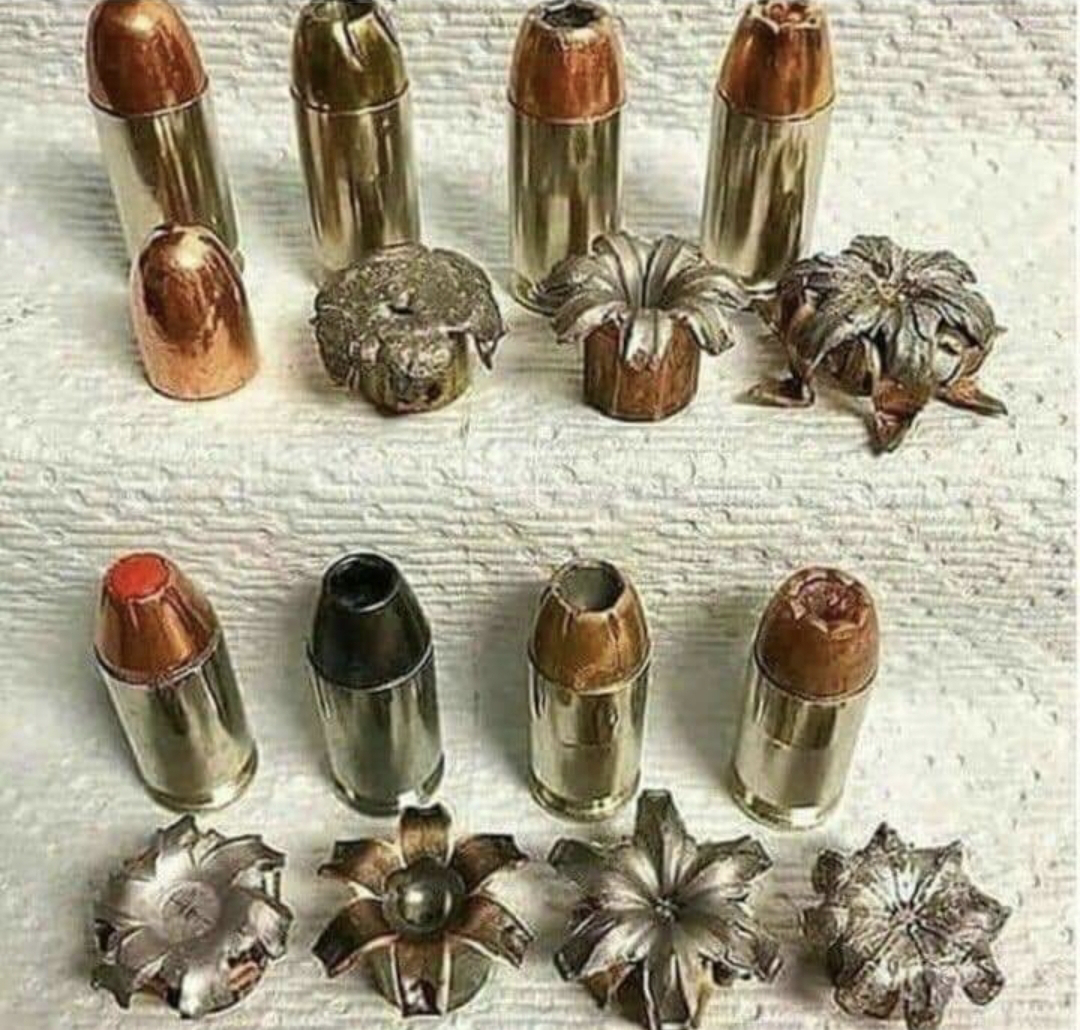 FWIW, I want to expound a little on on that retarded statement about the "high power" 9mm ripping your lungs from your chest or whatever that idiot Biden said.
I can say with some degree of certainty that shot placement and bullet performance are probably the two most misunderstood aspects of shooting. Even amongst some of the more experienced shooters and most assuredly amongst novices and non-shooters. It's a science and not something that can be explained properly in a casual conversation at the barbershop.
I've seen astonishing successes with smaller, slower, weaker calibers and dismal failures with larger, high-velocity, powerful calibers. Is it always about shot placement? No, it's not. Sometimes it's about bullet construction and sometimes it's a combination of the two.
Just because I killed a bear once with a .22 magnum doesn't make the
.22 magnum a bear gun. I don't recommend it and don't condone it but the situation was urgent and that's what was handy. I fired a single, perfect shot at about 50 yards, he trotted about 3 steps and tipped over. Deader than a hammer.
Over the course of a couple of years, I had to kill 3 German Shepherds. I'm not going to explain why. Just suffice it to say that it was necessary and legal. One was feral, the other 2 were livestock chasers. The feral dog was 65 yards away, sitting by a bush. I fired one shot from my Glock 23 loaded with home-grown 165 gr. JHP's. The dog didn't even stand up. He dropped like a rock. A couple years later, a big male German Shepherd was on our land chasing horses. I whistled and he stopped briefly and turned to look my direction from maybe 100 yds away. I touched off a round from my .30-'06 loaded with 165 gr. BTSP's. Again, like a rock. However, a couple weeks later, his brother showed up and wormed his way under the fence and into our chicken pen. I hollered at him and he scooted back under the fence and offered a broadside shot. I shot him right behind the left shoulder but a tad higher than I wanted, with the same .30'06, same load. He yelped and ran about 3-400 yards to his house. The owner took him to the vet and got him patched up and he was running around again in a few days.
What was the difference? The first dog was shot a JHP handgun bullet designed for self-defense. Even at that range, the relatively slow handgun bullet expanded fairly well and left an exit wound the size of a grapefruit. A generic JHP probably would not likely have done so well and a FN-FMJ most definitely would have resulted in a wounded dog.
What about the other two dogs, shot with same gun and bullet?
Well, the first one was hit roughly at the point of shoulder and the bullet immediately encountered bone which shattered and sent fragments into the vitals, then traveled diagonally through the body and exited near the opposite side hip. Pretty dramatic. He was dead before he hit the ground. Different story with other dog. He was perfectly square, broadside to me. The bullet both entered and exited between ribs and traversed the body from left to right, just above the heart and through the top of the lungs. The bullet, being designed for big game, failed to expand and basically left a .30 caliber hole on both sides. Had that bullet hit the shoulder, or maybe even a rib, the results would have been different. If the bullet had been, say, a 130 grain JHP, it would have certainly cut the dog in half.
As many other hunters have, I've seen nearly every species of mammal in North America shot with everything from .22 LR to .30-30 to a dozen different types of magnums with results ranging from predictable to puzzling. Performance factors involved include velocity, bullet weight and diameter, bullet construction, bullet style and precise shot placement. Success may also be determined by the tenacity of the animal. See how much lead a badger, porcupine or opossum can soak up compared to a cottontail. Or a big bull elk compared to a bull moose.
So, I could go on and on about this but hopefully,  my point has been made. Choose your bullet and your shot carefully!
Posted by @Desertscout1 at 22:54 No comments: