Would U.S. Marines fire on civilians?

DD Form 3206 (Rev 2/96)JOINT SERVICES TRAINING COMBAT ARMS SURVEYPart A (Confidential when filled in)This questionnaire is to gather data concerning the attitudes of combat trained personnel with regard to non-traditional missions. All responses are confidential and official. Write your answers directly on the form. In Part II, place an "X" in the space provided for your response.

5. How many months did you serve in Operation Desert Storm/Desert Shield?( )

Part II. Attitude:
Do you feel that U.S. combat troops should be used within the U.S. and bordering countries for any of the following missions?
(Strongly Disagree) (Disagree) (Agree) (Strongly Agree) (No Opinion)

16. Advisors to SWAT units, the FBI, or the BATF

20. Environmental disaster clean-up in bordering countries including toxic and nuclear.

23. Humanitarian relief (e.g. food and medical supplies, temporary housing and clothing and domestic care).
Do you feel that U.S. combat troops should be used in other countries, under command of non-U.S. officers appointed by the U.N. for any of the following missions?

31. The U.S. runs a field training exercise. U.N. combat troops should be allowed to serve in U.S. combat units during these exercises under U.S. command and control.

32. The U.N. runs a field training exercise. U.S. combat troops under U.S. command and control should serve in U.N. combat units during these exercises

33. The U.N. runs a field training exercise. U. S. combat troops should serve under U.N. command and control.

34. U.S. combat troops should participate in U.N.missions as long as the U.S. has full command and control.

35. U.S. combat troops should participate in U.N. missions under U.N. command and control.

36. U.S. combat troops should be commanded by U.N. officers and non- commissioned officers at battalion, wing and company levels while performing U.N. missions.

37. It would make no difference to me to have U.N. soldiers as members of my team.

38. It would make no difference to me to take orders from a U.N. company or squadron commander.

39. I feel the President of the U.S. has the authority to pass his responsibilities as Commander-in-Chief to the U.N. Secretary General.

40. I feel there is no conflict between my oath of office and serving as a U.N. soldier.

41. I feel my unit's combat effectiveness would not be affected by performing huminatarian and peace keeping missions for the U.N.

42. I feel a designated unit of U.S. combat soldiers should be permanently assigned to the command and control of the U.N.

43. I would be willing to volunteer for assignment to a U.S. combat unit under a U.N. commander.

44. I would like U.N. member countries, including the U.S., to give the U.N. all the soldiers necessary to maintain world peace.

45. I would swear to the following code:
"I am a United Nations fighting person. I serve in the forces which maintain world peace and every nation's way of life. I swear and affirm to support and defend the Charter of the United Nations and I am prepared to give my life in its defense."

46. The U.S. government declares a ban on the possession, sale, transportation, and transfer of all non-approved firearms. A 30-day amnesty period is established for these firearms to be turned over to the local authorities. At the end of this period, a number of irregular citizen groups and defiant individuals refuse to turn over their firearms to authority.
Consider the following statement:
"I would fire upon U.S. citizens who refuse or resist confiscation of firearms banned by the United States government."

Posted by Desertscout1 at 23:14 No comments:

Obama's father served in WW II, really?
How can we not believe some of the charges about citizenship, religion, etc., after hearing what he says on this? Obama said his father served in WW II? Barack's father served in WW II?He said so in a speech. Here is an 18 second video: CNN News clip:  http://www.youtube.com/watch?v=Fv4jnlkxOaw
Is he a compulsive liar? Were there no reporters who checked or double checked these statements and called the party on this? They did for everyone else. Why not him? Like it or not, here are the facts:

The CNN clip of Obama is surprising. I guess I shouldn't be surprised that this lie wasn’t uncovered, questioned or debated before the Nov. 2008 election. Oh well, He must have just "forgotten" the facts, again. Or perhaps he really doesn't even know the difference between truth and fabrication?

Why must we have training to exercise Constitutional rights?

Here in Arizona, we have what is wrongly described as "constitutional carry", meaning that we can in most places without having to get a carry permit. As many of you know, the only way that I would consider it "constitutional" is if there were no restrictions other than maybe restricting convicted felons. Arizona's relatively new law is big hit with those that vehemently oppose having to get training to get a carry permit although one must still provide proof of training, albeit very minimal, to get a permit in AZ. (The ability for AZ residents to still obtain an AZ carry permit only benefits those that wish to enter establishments that sell alcoholic beverages by the drink and those that wish to travel to other states that have reciprocity with AZ). Those of us that work with untrained people on a daily basis understand why the states mandate it even if we don't completely agree with it.

An unintended consequence of Arizona lowering it's training standards from the original 16 hours to 8 hours and then to a minimal, token safety class is that many states may eventually realize that and drop their reciprocity agreements. NM is considering dropping AZ it as I type this.

It is true that training is not required by the constitution but neither is taking drivers ed or getting a drivers license which very few will dispute. Is not driving and the right travel to work and to visit and help sick friends and relatives or whatever truly a part of pursuing life, liberty and happiness as enumerated by the constitution? Is not building a house or becoming an electrician a part of said pursuit? Yet we must, and do, get training, permits and inspections to exercise these pursuits.

I truly believe that we should not have to get permits and training for these things but we do and it is a fact of the life that we have allowed to be imposed upon us due to our apathy and reluctance to disturb our own comfort. If we had never allowed so much regulation and restriction in our lives, society would be more able and willing to take care of themselves today. If our society hadn't been convinced many years ago that guns NEEDED to be regulated and accepted that regulation because they were somehow inherently dangerous, society over-all wouldn't be as ignorant in gun matters as they are today. Kids that grew up on a ranch in Wyoming or a farm in Nebraska or a small logging town in New Mexico really don't need the training as bad as 95% of the rest of the nation. There was a time when those numbers were reversed but that was long ago and the majority of people nowadays NEED, desperately NEED training in many things so that are not a danger to themselves and to the rest of society.
Below is an example of inadequate training or not exercising that knowledge. The result is the same in either case. 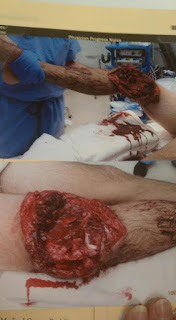 After saying all that, I still don't believe that training should be legislated but, unfortunately, neither can we legislate common-sense and it seems that many of us, whether through ignorance, apathy or ego, cannot or will not seek training.