In Tumultous Times, How Safe is Your Church? 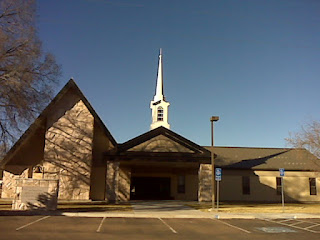 OK, the time has come to discuss a very serious and grossly misunderstood subject. Active shooters... even the name is misunderstood. What if an attacker uses a knife or machete or a chainsaw or a baseball bat? Maybe active assailant would be more appropriate.  The general response by the ”attackees" and the results of the attack will be much the same regardless of how it is perpetrated. However, for the purposes of today's discussion, we are going to specifically address an active shooter.

To earn the title, active shooter or active assailant, one typically has to conduct their evil deeds in a place where there are lots of people, generally unarmed people like a school, or a mall... or a church. Yes, sadly, society has degraded to a point where we are not even safe in our places of worship. Every major religion, and many of the lesser knowns, has been attacked right here in America. Catholic, Protestant and Jew as the saying goes. Baptist, Church of Christ, Mormon; none are exempt. The only real difference is how the church and/or the congregation responds. Some have policies against guns, some have security staff on the payroll and others just pretend it will never happen to them. After all, if we live righteously, isn't God supposed to protect us?
God will do what He will do. Bad guys have the ability to make their choices, good or bad, just like the rest of us. If God were to protect us each and every time they (or we) made a bad decision, our reason to be on this earth to begin with would be negated. Our free agency, and theirs, would no longer have meaning. So what do we do? Stay home? Pray a little harder? Post guards at the doors? Carry a gun?

As mentioned above, some Churches have armed security on staff. Not a bad idea. Maybe not ideal but multiple well-trained, highly visible individuals could certainly be a deterrent. Some Churches have adopted the "flee, hide, fight" philosophy that the Department of Homeland Security introduced a few years ago. Let's talk about that one for a minute...

Speaking strictly for myself, I think "flee, hide, fight" is grossly flawed. I see this doing nothing but instilling panic and creating a "fish-in-a-barrel" effect for the shooter. A large congregation cannot all fit through one or two doors before the shooter has time to inflict many, many casualties. Add that to the fact that all the chaos and people running every which direction would make it very difficult for anyone to address the shooter whether they physically, bodily attack him or respond with weapons of some type. Even if you made it out the door, down the hall and outside, are you sure that there are not more shooters outside prepared for just such a response?

Hide? Really? Where in the world are you going to hide from one or more determined attackers in a building with almost bare rooms save a few folding chairs and a table? Do the doors even lock in the rooms that are available? Yes, if you're lucky, you might delay them finding you until the police or others arrive. You may also just create another "fish-in-a-barrel" shooting gallery.
Fight? OK, now we're getting somewhere! Let's talk about that for a bit and look at some different scenarios. I've been to a few other churches other than my own as a guest and it seems like one thing is fairly consistent... and predictable. Most of them have some sort of an opening exercise in a larger, more open area and then split up into groups and retire to their respective classrooms. Let's take them in order. If you were a shooter bent on achieving a respectable body count, wouldn't that large room be a logical place to start? The congregation would generally do well to sit away from the outer edges of the seating arrangement, whether it be wooden pews or folding chairs. Select personnel, whether they be former or current law enforcement, veterans or just men or women determined not to allow a catastrophe to happen while they are present, should sit in strategic positions where they can best respond if necessary.

If the worst case scenario were to happen, GET DOWN! Right where you are, GET DOWN! This puts some visual interruption between you and the shooter and throws a monkey wrench in his plans. He was counting on you all jumping up and piling up against the door. Don't make it any easier for him than you have to! Will getting on the floor guarantee that you won't be shot? Not necessarily but it will most decidedly cut down on the number of casualties that are created. Men, shield the women and children as much as possible. STAY DOWN until you have some indication that it is safe to get up. Don't try to be a hero. If you are not trained and armed, stay out of the way of those that are and let them address the situation without having to worry about innocent people gumming up the works. If there is no one in the congregation that is either armed, trained or both, you must take it upon yourselves to either subdue the shooter or make life so miserable for him that he runs away.
What can you do? How effectively do you think he can shoot through a hail of hymn books, shoes, briefcases, scriptures, baby bottles and cell phones? As you throw, advance towards the threat. Keep throwing and keep advancing. Some of you will get shot but I promise many more will not. You have made your choice to stand and fight because he made his choice to attack God's people. I think it wouldn't be unreasonable to think that God may lend a hand at this point. Maybe the fact that you are brave enough to fight IS God's response.

OK, what happens if you're in the hallways or classrooms when the shooting starts? Get in the nearest room and lock or barricade the door as best you can. Take stock of your resources. Weapons? Chairs, music stands, pencils, briefcases, fingernails, water bottles, staplers, etc. Be prepared to relentlessly introduce the shooter to all of the above if he manages to breech your doorway.
SURRENDERING OR COMPLYING WILL NOT SAVE YOU!! It is most unlikely that he came there to take hostages. The statistics are abundantly ​clear. In 100% of situations where one of more individuals with weapons have tried to kill or control a group of people, people that fight have a much better chance of surviving than those that cower. An excellent example is the Warsaw Ghetto Uprising of 1943. Read up on it...

I have a few more thoughts on this that I will share in the next segment of Southwest Freedom.
Follow me on Gab.com, @Desertscout1
#SouthwestShootingAuthority
#Desertscout1
#TheShootingBench
Posted by @Desertscout1 at 13:21