SHOOTING vs. GUNFIGHTING
by Cope Reynolds

Sadly, few people really have even the remotest concept of just how critical proper defensive training is in a fluid, dynamic situation like an active shooter scenario. I don't care how well you can shoot. I don't care if you're an NRA instructor. It doesn't matter that you used to be in the military or were the captain of your college pistol team (yeah, they used to do that!) or even if you were a police officer. What matters is how well you can address a violent threat in the midst of a mass of screaming, hysterical people.

Now, I don't mean to be disrespectful to NRA instructors, cops or soldiers. I would never try to take anything away from them. They are each well trained and qualified to do specific things for specific reasons while working with specific people. It's just that defensive shooting, especially when it involves active shooters, is not the same as combat in the jungles and deserts, shooting on a range or walking the streets of the city. The majority of your rank and file police officers qualify maybe twice a year at a stationary target under very strict supervision and very, very few of them had even the smallest modicum of active shooter training outside of classroom discussion. That is the one thing, one of the biggest myths in the firearms world, that just because someone spent years in any of the above professions that they are automatically, uniquely qualified in defensive shooting instruction or active shooter interdiction (I'm going to call it ASI for the remainder of this article). Experience is a great teacher but that doesn't always mean that the experienced are great teachers.

Good accurate shooting is a very small part of this equation. Virtually anyone can shoot reasonably accurately in a matter of just a few hours with good, patient instruction. However, standing on a level range with the sun shining and the birds singing, shooting at a paper target that is not particularly angry with you hardly prepares you for neutralizing one or more religious zealots or drug-crazed fanatics in a crowd of people who are desperately trying to get out of the building and make it home safely. Target shooting does NOT prepare you for this! There are just way too many things that can go horribly wrong in a heartbeat. Think about this, can you reliably make a head shot on a person from a standing position at 15 or 20 yards, or even more, in a room full of terrified people? Can you do it when you can only see half of the head in a hostage situation? Can you reliably engage multiple moving targets while you are also moving? In all honesty, no one can 100% of the time but I think I make my point. Without competent training, practice and the proper mindset, there is literally no possibility of accomplishing any of these feats outside of that “one-in-a-million” lucky shot.

The tactics employed in defensive shooting, especially ASI, are best described as an art, not a science. In saying that, it means that sound tactical decisions are for the thinking person. One can study tactics to help in making those sound decisions but there may be 100 ways to accomplish the same goal correctly. You will rarely, if ever, do the exact same thing in any 2 scenarios and it would be impossible to plan or study for everything that you may run into. If it WERE possible, it would mean that, theoretically, everyone could have read the same book, including the bad guy, thereby making the possibility of ever achieving a tactical advantage very difficult.
So, with that in mind, let’s look at what Merriam-Webster’s dictionary says are the 2 definitions of tactics:
1:  a device for accomplishing an end
2:  a method of employing forces in combat

Both of these definitions apply to some degree to defensive handgunning in that when our assailant made the decision to cause us or someone else harm, the confrontation has turned into a combat situation and whatever strategy that we employ will be the tactics that we hope will be accomplishing an end... an end to the threat.

Why do I share all this with you? Because if you carry a gun for self-defense (which I strongly advocate) and have not had some degree of training outside of recreational shooting, you are more likely to be a liability (read danger) to yourself and everyone around you if you try to be a hero in one if these crucial, dynamic situations. Personal defense is one thing, but ASI is quite another. For your own safety and everyone around you, you may find that retreating to a room or safe area away from the shooter and using your weapon only for the defense of yourself and others in your area, may not only be the safest thing to do but would make it less likely that you would interfere with those that are more qualified to deal with this event.

It doesn't make you a coward, it makes you smart and responsible! 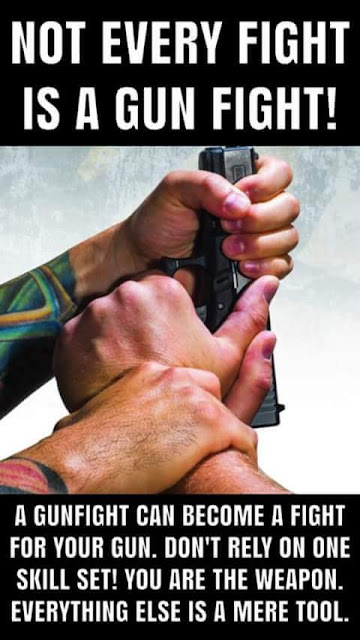