The firearms community has learned a lot about gun safety over the years, particularly in the last 20 years or so. Some things that are considered a gross violation of the safety rules today was commonly accepted not that long ago. You wouldn't believe the number of times that I have been called a "safety nazi", or something similar for pointing out the ridiculously stupid things that some gun owners do, even experienced gun owners.
"Experienced" isn't always the equivalent of "good"! Jason Duncan was on the range with me as an assistant instructor during the training of nearly 2000 students before we each went on to other things. Jason and I have seen some things that would make your hair white and your teeth curly but we NEVER had an accident with injuries of any description because we realized that you only get one chance to do this right. There are no "overs" or "I'm sorry's". You get one chance.
The following story is one of MANY that involves "trained professionals". We have seen cops, soldiers, even special ops soldiers that sometimes do stupid things. The saying that is SO common amongst neophyte shooters is, "Oh, I was trained by So-and-So. He was a cop so he obviously knows what he is doing", or he was in the Army or whatever.
The point is, even these "trained professionals" are not immune from this kind of stuff happening to. Understand this... YOU CAN NEVER, EVER TAKE GUN SAFETY FOR GRANTED! When you are handling a firearm, 100% of your attention should be on that gun 100% of the time! PERIOD!
ALWAYS assume that any firearm that you handle it is loaded!
ALWAYS be conscious of where the muzzle is pointing and NEVER allow the muzzle to cover anything that you are not willing to destroy!
ALWAYS be absolutely certain to keep your finger OFF the trigger until you have made the conscious decision to fire!
ALWAYS be aware of what you are shooting at and what is in line with your target!
(I have embellished the 4 universal safe gun handling rules just a tad for emphasis.)
The officer in this story learned a very, very hard lesson about violating every, single one of these rules!
.
https://www.fox13news.com/news/affidavit-brevard-county-deputy-thought-gun-was-unloaded-before-jokingly-shooting-twice-at-fellow-deputy?utm_campaign=trueAnthem_manual&utm_medium=trueAnthem&utm_source=facebook 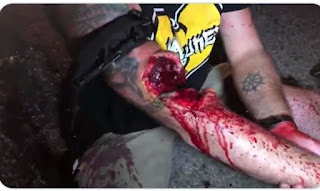