Some of you may recognize parts of this from an old article I did years ago. I have added more current and specific information and decided to make a new post out of it.

For personal protection, the shotgun has no peer in most cases. It is a graphically devastating weapon. For most of the purposes considered in this article, a pump-action 12 gauge is hard to beat. Although the 20 gauge is a very comfortable and effective gun to shoot, it’s best reserved for hunting. This is because you’ll often have a hard time finding either buckshot or slugs for the 20 bore. Wal-Mart, for example, rarely even carries the heavier 20 gauge stuff, simply because there’s not enough demand for it and it’s hard to get them to special order things for you sometimes. A lot of men buy a 20 gauge for their kids or wives, but they mostly use them to hunt birds or rabbits, so most stores don’t see a need to carry anything but the smaller shot. Compared to the 12 gauge, there just aren’t that many people who hunt deer with a 20 gauge or use it for home defense even though it will do fine for either.

There’s not anything wrong with the 20 gauge by any means, I have two of them. But for a survival situation, the 12 gauge is a much better choice, primarily because of ammo availability and selection. Police, military, hunters, survivalists, militia members, ranchers, etc., all use the 12 more than anything else. If you do insist on using the 20 gauge, and plan on storing a bunch of shells to make up for non-availability, what happens if you have to “bug-out” on foot? You can only carry so much and leaving the gun behind shouldn't be an option, as I think a shotgun is essential. When you use up what you can carry, you’ll just be out. You can’t carry all that reloading stuff with you, either. I personally am not really stocking up on any reloading supplies. Of course, I have a bunch anyway, just because it’s a serious hobby of mine, but I figure when things go bad, I would rather have all those components already assembled into something that I can use.

Something else to consider is power. While the velocities of the 20 gauge are comparable to the 12 gauge, the weight of any given shot charge or slug is much more with the 12. Granted, this generates a little more recoil, but my 5’5”, 135-lb. daughter can handle a 12 just fine. The 20 gauge usually shoots a slug that either weighs 273 grains or 328 grains. And I have one “recipe” for a 341-gr. slug. Compare that to a 12 gauge that shoots slugs weighing anywhere from 437 grs. to 575 grs. That’s a hell of an increase in delivered energy, which translates to penetration and longer range.

As far as buckshot goes, #3 buck is the by far the most common for the 20 gauge. If you get much bigger than that, the 20’s little shell just doesn’t hold enough pellets to do any good. If the 12 gauge only holds between nine and 12 double-ought buckshot pellets (depending on manufacturer and type of wad used), you can safely assume that the 20 would hold only five to six of the same pellets. While you can put eight pellets of #1 buck in a 20 gauge shell, most 12 gauge loads will hold 16. In any case, you’re not looking at a very dense pattern from the 20 for defensive purposes.

So let’s talk just a bit about patterning. Without getting too deep into it, the degree of pattern spread of the shot fired by a shotgun is determined by the amount of restriction in the last 2 or 3 inches of the barrel. It’s called “choke”. For the purposes of this article, we will only concern ourselves with four different chokes; Full, Modified, Improved Cylinder and Cylinder Bore. Full choke is the tightest of the four. It generally provides for more pellets on target at a longer range. It is not as useful for shorter ranges, especially when hunting. The Modified choke is a little more open and is a pretty good all ’round choke. Improved Cylinder is more open yet and is at its best at closer ranges. Improved cylinder works well for quail, pheasants and grouse or other critters that jump right out from under your feet. Cylinder bore is completely open, meaning the there is no restriction at all in the barrel. Cylinder bore also works well for birds and bunnies that are close in. It is also the most popular for self-protection shotguns. More on that in a minute… There are a number chokes besides these and it seemed like they came up with something new every few years but I think they have most of the gaps filled now. For my money, I can accomplish everything that I need to do with one of the four chokes mentioned above.

Depending on the configuration of the barrel and the type of ammo used, the shotgun can be used for hunting upland game birds, waterfowl and virtually all game animals from the smallest to the largest and most dangerous that America has to offer. It can also be used effectively for most African game. It can be used for breaching doors, signaling, less lethal applications, stopping vehicles and making bad guys really wish they had chosen a different profession. Long story short, there’s not a whole lot the scattergun can’t do. It is an incredibly versatile weapon in the hands of someone that knows it and understands its limitations.

Let’s talk about defensive uses for the shotgun for just a minute. Its an amazingly effective and devastating weapon with a wide range of applications. Buckshot is great for home defense. My favorite is #4 Buck for the home because of the reduced possibility of exiting the average sized person and injuring a family member or other innocent. One of these days, we’ll explore that at great length.

Slugs are yet another trick up the sleeve of the shotgun. As the name implies, a slug is a single projectile. A single, massive, awe-inspiring projectile. The 1.25 ounce, .73 caliber, 12 gauge slug, at somewhere’s in the vicinity of 1300 or 1400 fps doesn’t take no for an answer. Solid core or steel doors, block walls, engine blocks, wheels, transmissions, grizzly bears, etc are little match. Contrary to popular belief, the popular and affordable Foster-type, rifled slug can be fired through any choke. It is a complete myth that the rifling on the rifled slug is there to impart a spin on the slug. Not true. The rifling facilitates the firing through ANY choke, even Full Choke. However, you will probably get the best performance out of Improved Cylinder or Cylinder Bore.

Before I leave, A couple of the best choices for defensive shotguns in my not so humble opinion are the Mossberg 590 or 500, and the Remington 870. While some will tell you that the 590 is far and away better than the 870, it really comes down to what you like. I’ll admit that the 590 has a slight edge over the 870 in my opinion, simply because it was designed solely as a combat shotgun. It really has no sporting purpose. There are plenty of after-market accessories available for both the Mossberg and the Remington. Also, Winchester makes a couple of suitable defensive-type shotguns, but I have little personal experience with them.

Here's a comparison of popular shot sizes for reference... 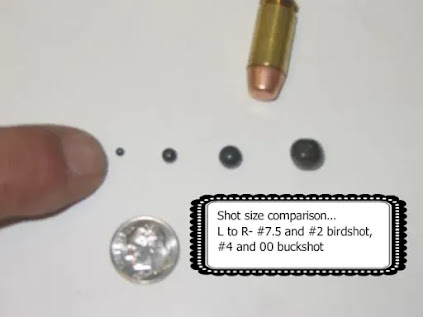 So… there’s your crash course on all things shotgun!

If you'd like to help support our efforts, you can do so by donating to The Shooting Bench by clicking the "DONATE" button below!